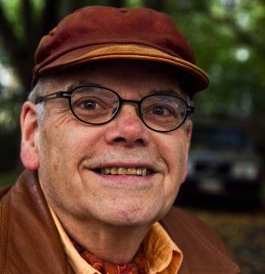 The 2011 Peace Medallion will be presented to Jon Oliver at a YMCA Peace Week ceremony on November 26 at 7:00 pm at the Hugh John Flemming Forestry Complex, 1350 Regent Street in Fredericton. All are welcome.

When nominated for the YMCA Fredericton’s Peace Medalliion, Jon Oliver was described as an “endearing gadfly to city, provincial, and federal officials. Jon reminds politicians of their responsibilities to the common good. Jon has motivated countless individuals, including many young people, to become politically engaged and active whether it is through participating in party politics or community activist groups, defending civil liberties, advocating for the protection of Fredericton’s natural spaces or building community in his neighbourhood.”

A native of Prince Albert, Saskatchewan who made Fredericton, New Brunswick his home in 1969, Jon has been an activist for public housing, nature, civil liberties and justice for decades. Jon is regularly found at meetings and events where the community’s and world’s most pressing concerns are being discussed. We can count on Jon to speak up for the public interest.

Jon is a member of the Canadian Civil Liberties Association and is a founding member of the West Platt Community Association. He has worked tirelessly to advocate public policies which bridge gaps of inequality and systemic violence. He has done pro bono architectural work for organizations he supports, including the Conservation Council of New Brunswick, the Fredericton Food Bank, and the John Howard Society of Fredericton.

Recognizing that media control was a growing problem in the 1960s, Jon co-founded the national independent magazine, The Mysterious East, which from 1969-1972 produced wise commentary of matters in the province, Canada and the world. According to Russ Hunt, professor of English at St. Thomas University and an original editor of The Mysterious East, “Jon’s active participation in the editorial process of The Mysterious East regularly generated critical news stories and kept writers honest and true to the magazine’s mission. Stories on housing in New Brunswick cities, for example, were informed by Jon’s commitment to social justice.”

In front of Jon’s inviting and colourful home on Northumberland Street is a community bulletin board and a bench where a seat and books are often left for passersby. One passerby who had just moved to Fredericton remarked that when he passed his home, “it made me feel safe” and he wondered, “what kind of wonderful person lived there.” Jon made a practice of renting rooms to students at reasonable prices while advising and challenging them on their education. A lawyer in Moncton says that living with Jon’s was just as valuable, if not more, than the four years he spent at St. Thomas University.

Jon’s decades of activism for the marginalized peoples of our community would have made his hero Tommy Douglas proud. Jon’s example reminds us of Douglas’ famous quote: “courage my friends, it is never too late to build a better world.”

The Common Front for Social Justice New Brunswick is concerned that recent changes in the health care system would open...

On March 11, 2022, the Common Front for Social Justice celebrates 25 years of activism

"Poverty is no more natural than slavery and apartheid. It is created by human beings and it can be eradicated...

Throughout the year, the UN dedicates certain days to a particular theme. In 2008, to remind us that we share...

On behalf of five organizations that represent people living with disabilities, people experiencing poverty, and tenants in the province of...

On Miramichi Lake, who holds the paddle?