Students at the ‘camp-out’ in the Mt. A academic quad. L-R: Lily Falk, Claire Henderson-Hamilton and Catherine Turnbull. Photo by Bruce Wark.

Mount Allison University students set up tents and other equipment on the morning of March 20 as they began an indefinite, round-the-clock occupation of the academic quad outside the university library.

The students are demanding that Mt. A. administrators make a commitment to withdraw university investments from the fossil fuel industry.

The occupation is being led by the campus group Divest MTA which has been campaigning  for the last four years for an end to endowment fund investments in fossil fuel companies.

“We’re demanding that the university consider the ethical concerns that its constituents have,” said student Catherine Turnbull.

She added that Divest MTA has the support of a large number of students as well as many members of faculty and staff.

“We see a really drastic divide between the interests of the administration and the concerns of students and faculty who they are supposed to be representing,” she said.

Divest MTA is concerned about the environmental effects of burning fossil fuels including the threat of catastrophic climate change.

The group also says the university is contributing to social injustice toward indigenous peoples who suffer the ill effects of big oil and gas projects such as the Alberta Tar Sands.

Student Claire Henderson-Hamilton accused administrators of hypocrisy especially during a year when the university is focusing on indigenous culture and ways of knowing.

“For this university to advocate for indigenous knowing and then to also be supporting indirectly an industry that is contributing to the destruction of their land, it’s such a contradiction and it’s pretty dishonest,” she said.

Divest MTA and its supporters are also calling for changes in the way the university is governed by its Board of Regents.

Alex Lepianka, who served as a student representative on the Board’s Responsible Investment Committee, said advocates for change got nowhere. He added that the Board relies too heavily on the university administration which has consistently opposed shifting investments out of fossil fuels.

“Part of the problem is the administration itself. Its convictions that this cannot be done is part of the reason why it hasn’t been done,” Lepianka said.

He pointed out that last month Laval became the first Canadian university to begin switching its investments away from fossil fuels.

“Where a school like Laval has made the commitment to divest, to figure out how divestment would be possible, we see the exact opposite effort being made on the part of the Mt. A. administration,” he said. 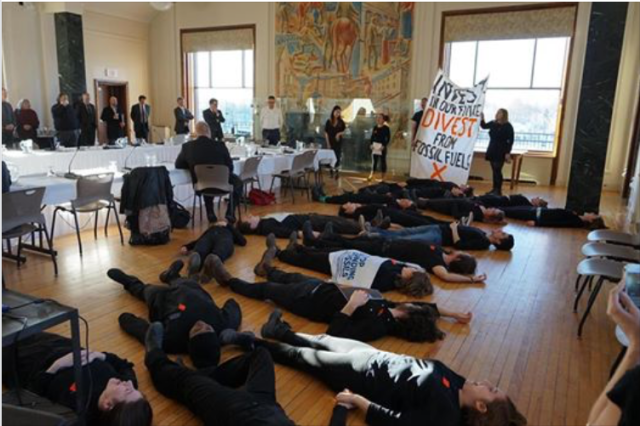 Last month, more than 40 Mt. A. students conducted a “die-in” protest in Tweedie Hall where the Board of Regents was holding its regular meeting. The students lay down on the floor, feigning death to represent the victims of oil and gas exploitation. The protest ended the Regents’ meeting, but did not result in a promise to move toward disinvestment in fossil fuels as the students had hoped.

Members of Divest MTA say this latest occupation is designed to step up the pressure for divestment.

“I think it’s important that students express that they’re angry and they’re upset and they’re frustrated with the administration, with the university for not listening,” Claire Henderson-Hamilton said when asked why she’s participating in the occupation.

“It’s been a long time now that Divest has been speaking out about this issue and it seems as though it’s gone unnoticed by the administration.”

Note: Warktimes asked the university for its comments on the occupation, but so far no one has responded to our request.

“The students have not provided us with any specific demands related to their activities today, however we understand their goal is for the University to completely divest of investments in fossil fuels. For the past year there has been an active process on campus, including representatives of MtA, to review responsible investing and recommend a range of additional initiatives.”

Bruce Wark worked in broadcasting and journalism education for more than 35 years. He was at CBC Radio for nearly 20 years as senior editor of network programs such as The World at Six and World Report.

This article was first published on The Wark Times.

The New Brunswick government released maps Friday confirming that large parts of downtown Sackville are at severe risk of flooding....

Concerns about the disappearance of local news and the dominance of the Irving media empire bubbled up Monday when the...

Only six days into COP26, activists gathered in the streets of Glasgow declared the climate conference a failure. Anyone following...

About 250 people attended a noon-time rally today to protest against cuts to services at Sackville Memorial Hospital. “We love...

Higgs…. Who Would be King