The city of Saint John can no longer sustain itself under the current provincial tax system, according to a report presented by city manager, Jeff Trail, to Saint John City Council on Oct. 16.

Trail’s report to city council was based on a study commissioned by Saint John Common Council from Ontario-based academics, Harry Kitchen and Enid Slack. The two were tasked with researching the property tax systems in other cities and towns across Canada to come up with sets of best practices.

“We’ve taken some to analyze their findings and come up with some recommendations, most of which would be out of the control of the city or any municipality for that matter,” Trail said to council. “In that they require changes to legislation by the provincial government.”

A major part of the revenue problem for Saint John is that under provincial law “machinery and equipment” cannot be taxed. That leaves Irving-owned industrial properties that dominate the city with a much lesser tax bill. Provinces like Newfoundland and Labrador, Quebec, Saskatchewan, Alberta and British Columbia all tax machinery and equipment on industrial properties.

“I think it is safe to say that Saint John is unique in its wide array of industrial properties within its boundaries,” Trail said, “Therefore this tax framework affects us differently and perhaps more than others.”

In reaction to the report, Stefan Guimond, a Saint John resident, said the tax breaks Irving companies have been granted over the years is “ludicrous.”

“Irving has such a uniquely vast presence in this city, their taxation should be just as sizable. It is ludicrous that a local hospital pays more than Canada’s largest oil refinery.”

Also in the face of relatively low industrial tax revenue, for the past five consecutive years, the city’s growth in tax base has been flat and consistently lower than the rate of inflation and the cost of living, Trail said.

“We’ve reduced headcount by 74 positions, rationalized parks and playgrounds, eliminated services in the absence of tax base growth.” 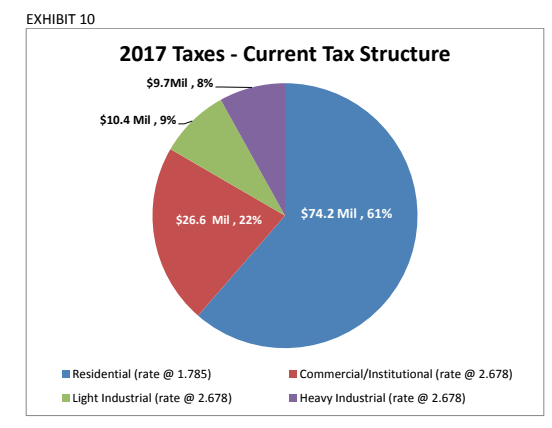 The city has held the line on its property tax rate for the past nine years, which is the highest in New Brunswick— yet the city has the lowest median family income when compared to neighbouring Rothesay, Quispamsis, Fredericton and Moncton.

“No longer can the city carry this burden,” said Trail.

Currently, Service New Brunswick is responsible for assessing all properties across the province. In 2017, Saint John received $120-million in property taxes, $20-million in provincial grants and $12-million in the city’s own sourced revenue.

Trail said the provincial grant is unpredictable in any given year but that because of population decline the city will receive even less in 2018 by about $3-million.

Saint John’s population fell by 3.6 per cent from 2011 to 2016 and for the first time in the province’s history no longer can claim to be the largest city in New Brunswick. For the sake of context, at the turn of the 20th century, Saint John had a population of just over 40,000; Moncton had 9,000 residents, and Fredericton had about 7,000 residents.

“This affects everyone. There is a mill in Edmundston. There is machinery all over this province and we are a city that’s hurting in a province that is hurting,” said Councillor Gerry Lowe Monday night. “Most of us know the companies and industries are making money and can afford some kind of taxation to help the cities that they occupy.”

The last time Saint John Common Council signalled to the provincial government their concerns with property taxation was over Irving Oil’s Canaport LNG facility. In response, the Province hired U.S.-based Nationwide Consulting Company Inc., a firm with a history of helping large oil companies like Shell and Exxon Mobil, get a lower tax bill. It ended with the city getting just over $2-million in property taxes, which was an increase from the controversial $500,000 they had to pay in taxes since 2005 when the facility opened, but still much less than the provincial assessment of $8.1-million.

“I worry this report will lay dormant. We’ve got to create a groundswell,” said Councillor David Merrithew.

For Guimond, citizens should look to their MLAs to see how the city’s requests to the provincial government will play out.

“This is such an obvious fix, which the city and its citizens want and need that any push back from MLAs would make any citizen suspicious of whose interest the legislature actually represents.”

Last weekend some 33,000 households woke up to the news that this winter may be especially difficult. The Government of...

Concerns about the disappearance of local news and the dominance of the Irving media empire bubbled up Monday when the...

Higgs…. Who Would be King

Dr. Higgslove or: How I Learned to Stop Worrying and Love COVID-19

Tiny homes: A tiny solution to a big problem