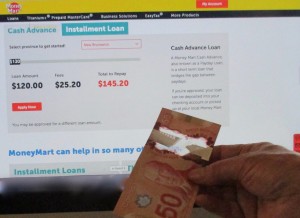 The New Brunswick government has surprised payday loan critics and the industry itself by proposing to limit the total cost of such loans to $15 for every $100 lent. It means that a typical $300 loan would require borrowers to repay $345 on their next payday. The $15 rate is contained in draft regulations posted this week on the government website.

“The regulations that were released with respect to fees are very favourable for borrowers,” says Randy Hatfield, executive director of the Saint John Human Development Council.

“The $15 that was recommended will put New Brunswick tied with Alberta for the lowest fees per $100 in the country,” he adds. “So that certainly is a welcome measure.”

Hatfield is also pleased with the government’s proposal to limit the maximum size of a payday loan to 30 per cent of a borrower’s net income — a regulation the Council recommended in its report to the government last year.

“We are surprised based on regulations that are in place in Nova Scotia and Prince Edward Island,” says Tony Irwin, President of the Canadian Payday Loan Association, which represents some payday lenders including the industry leader Money Mart.

Irwin is particularly concerned about the $15 maximum fee per $100 loan.

“Nova Scotia, the rate there is $22 per $100 and in Prince Edward Island it’s $25, so at $15, that’s quite a bit different,” he says. “We’re asking our members how that would affect their ability to offer the product in New Brunswick.”

Irwin adds that the $15 rate would make it difficult for some companies to operate especially in light of the proposal to limit loans to 30 per cent of a borrower’s income.

Although he’s pleased with the proposed fees and loan limits, Randy Hatfield says the draft regulations do not address the issue of repeat loans that borrowers often take out to repay previous ones.

“The business model for the payday loan industry requires a number of repeat borrowers,” he says. “We find repeat borrowing traps borrowers into a cycle of debt that is impossible to get out of.”

In its March 2015 report, for example, Hatfield’s Development Council points out that a typical, 14-day loan must be paid off on the next payday leaving many borrowers unable to cover their rent and other bills unless they take out another loan that also must then be paid off on the next payday along with the hefty borrowing fees. When they reach the maximum amount they can borrow from one payday lender, they’re forced to go to another as the debt cycle continues.

Hatfield suggests that New Brunswick consider adopting regulations from British Columbia that allow borrowers who have taken out three payday loans in a 62-day period to repay the money over two or three pay periods instead of just one.

New Brunswick’s Green Party leader also favours adoption of longer repayment periods for repeat borrowers. David Coon is concerned too that the proposed regulations would allow lenders to charge a fee of five dollars to cash a government cheque worth up to $2,500 and $10 for cashing a cheque above that amount.

The province has set a deadline of July 29 for those who wish to comment on the proposed regulations.

Tony Irwin of the Payday Loan Association, says he’ll use the comment period to propose changes that would strike what he feels would be a better balance between protecting payday borrowers while, at the same time, ensuring the industry remains profitable enough to continue offering its short-term loans in New Brunswick.

“We hope to engage the government in some discussion around these draft regulations,” he says, “so that we can come to a final set of regulations that will work both for industry and for consumers.”

Bruce Wark worked in broadcasting and journalism education for more than 35 years. He was at CBC Radio for nearly 20 years as senior editor of network programs such as The World at Six and World Report. He was the first producer of The House, a Saturday morning program on national politics. He currently resides in Sackville where he publishes Warktimes.

Reports that the Irvings had given up their New Brunswick newspaper empire have suddenly proven premature with the appointment of...

Poets Marilyn Lerch and Geordie Miller warned an audience of about 35 people gathered outside Struts Gallery in Sackville on...

The voices of New Brunswick’s health care workers and community organizations must be heard on any changes to the health...

The Common Front for Social Justice New Brunswick is concerned that recent changes in the health care system would open...